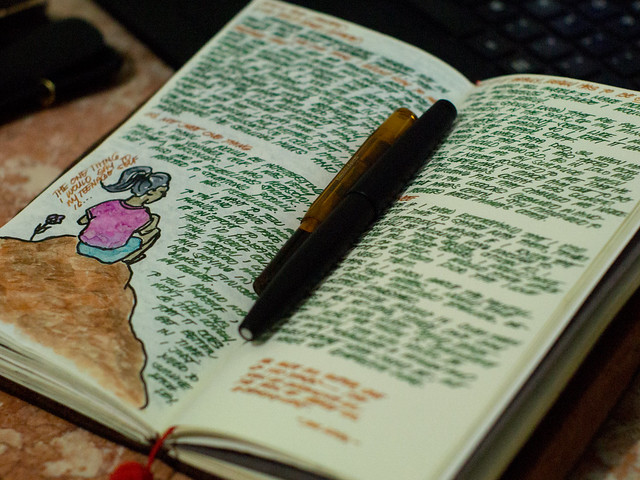 The Stationer Extraordinaire tagged me on one of their writing prompts this week. The prompt gave me pause because it’s something I think about often. I don’t always indulge in this line of thinking because nothing can be done about the past anymore, so it’s a futile kind of wishful thinking. Once in a while, the question is just hard to avoid because the answer would be my kind of escapist fantasy. Imagining that I had managed to press the rewind button somehow and meet my younger self, knowing everything I already know today.

Many people will valiantly say that they would not change a thing, because everything that happened made them who they are today. I would agree to some extent, but as long as we’re in wishful thinking mode here…

There are a lot of things I would want to tell my teenage self, actually; that I should try to make more friends and to exert more effort in keeping them, that I won’t always feel lonely and misunderstood, that I should pick a different major in college, that I should continue drawing and writing, that things will get better someday. However, if it really, really, has to be just one thing I can tell myself, I would tell the younger me that both my parents will die soon.

Nobody really thinks about their parents’ death. Not until they’re very old. When they’re just in their early 50’s and you haven’t even found your bearings in life yet, you take for granted that you’ll have them with you until you yourself have turned just a little older. It’s quite difficult when you’re still an immature young person when your parents die. You reach different milestones in your life, become a better-adjusted individual, become more successful in your career, and you end up wishing (quite often) that you were a better daughter or son while your parents were still around.

At almost 38 years old now, I still miss my parents so much. So if I can tell my younger self about just one thing, I would tell myself that my parents will die sooner than I was emotionally prepared for. I wish I can tell myself that it will almost break me, but that I will survive it. That I should spend as much time as I can with them, and to love them as fiercely as I am capable of, with everything that I have. That I should listen to everything they said. That I should treasure every moment because they’re going home soon.

I never indulge myself in such train of thoughts for too long, of course. One can never really know what could have been. The road not taken is completely gone and lost to us forever. One may formulate a million and one theories about what could have been had I only known what I know now, but one will never be completely sure.

What does the first five waking minutes of your day look like?

Leave me a link in the comments if you write something using the prompt. 🙂 Have fun!